Basicly there are two major things:
Problem 1: Inconsistent mouse sensivity in Scopes. (you can find hit in this thread here)
Problem 2: Some Player commands will be ignored by the game during “Release ADS animation”

So this is about the problem that the input commands gets ignored by the game during a certain animation.
The animation is the one that moves your weapons from the ADS position to the hip fire position (HFP).
(ADS = Aim Down Sight, that is when you hold right mouse button and look through the weapons scope/ iron sight)

This image shows how it works if you wait untill the end of the animation: 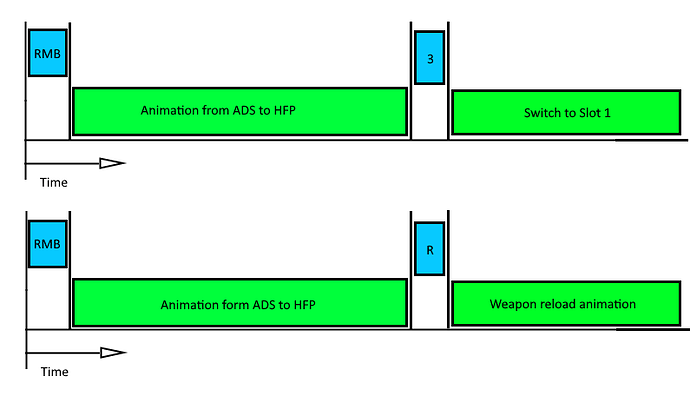 How%20it%20works%202795×465 13.9 KB
As soo as you stop holding the right mouse button (RMB) the animation starts and moves your weapon back in the hip fire position (HFP). As soon as it ended you can press the key to switch weapon / slot (here 3) or the key to reload your weapon (R).
And after you pressed the key the respective animation will execute.

But what happends if you press those keys before the animation ends: 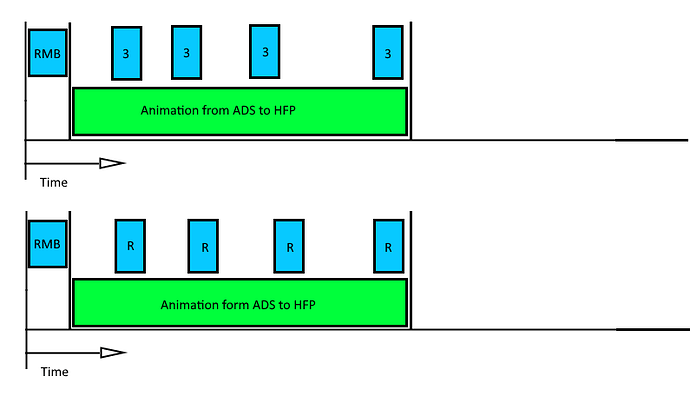 Ignored%20Commands795×465 11.3 KB
Well just nothing.
Even if you give this command several times, all of them will get ignored.
And this is a big problem in my opinion.

It killed me not just once because the game didn’t switch to the med kit even I pressed the key properly.
The players commands to switch weapons and slots should not get ignored.

My suggestioin would be to not ignore our commands but execute it after the “ADS to HFP animation” have ended.
That would look like this: 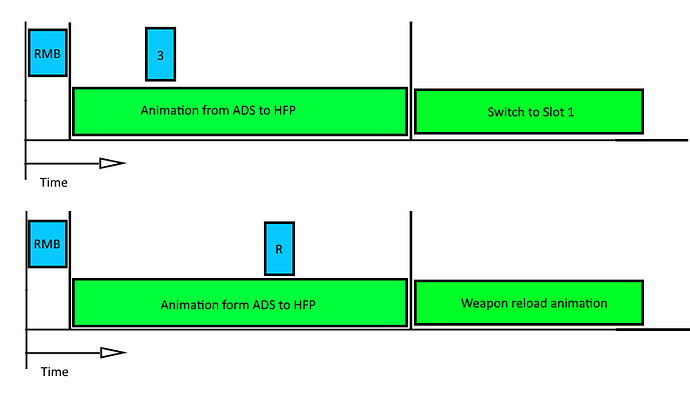 If this is too much work to programm you could use an easier solution:

The mentioned behaviour is in fact not consistent in the game. There are some animatioins that act differently: 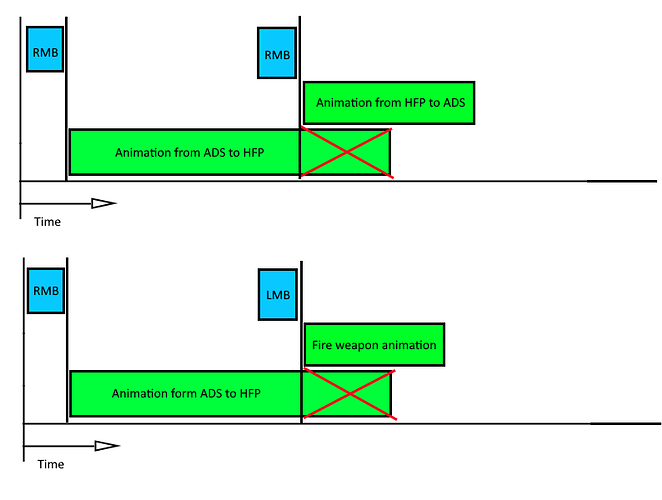 Obayed%20commands795×600 19.1 KB
Two of those animations are the “Fire weapon animation” (LMB) and the “ADS animation” (RMB).
These two animations have the right to interrupt the runing “ADS to HFP animation”.

You could just give other animations the same “Right” to interrupt it.

This simple change would reduce the frustration in this game by a lot.

This is interesting. I wonder if what happens during the animation is not strictly nothing, since I’m getting stuck in crouch, and I think you’ve found the trap. I try releasing crouch, I don’t stand. Then when I try the button again, I’m jammed going neither up nor down. I have to mash run to fix it.

I would like to add - again - that then sensitivity is reduced for roughly one second after ADS/scoping in. This is annoying and dangerous, as well. For me it seems/seemed awhile that there is a certain “block” of stuff after ADS/scope state change.

At any rate - and corresponding to your other FPS improvement post, Dantec - these mechanics/quirks need an overhaul.

Sorry man, i dont get your point. Why does the sensivity gets reduced for a sec?

Why I don’t know. Try it for yourself: keep your mouse in a smooth constant move and go ADS. You should notice that you will be very slow at first after ADS with a notable gain in sensitivity after a brief moment to a point where it should be.

Ah now I know what you mean. I could reproduce it and I think this is actually only something like a optical illusion. I compared where my crosshair will be when I dont press the RMB with where it is when I press it. The final location is the same. I tested with iron sight and with 1-4X scope.

Ah now I know what you mean. I could reproduce it and I think this is actually only something like a optical illusion.

No, it is not. Unfortunately.

Hi devs, do you think it is possible to remove this issue?

Even after the last big update the issue is still present in every fight. It is soo anooying. Devs can you please fix this.

I would like to know whether this problem is present on consoles too?
Will your commands also be ignored after you release the button to look through the sight?
During a fight I look through the scope of weapon one, release the button and push the button for weapon two. I have to push the butten usually 2-3 times before the game is finally ready to actually regognize my command. Very annoying expecially when you need a helalth pack.

So Paul answered my to this topic in the last stream and maybe it will be fixed in the next update. I’ll check it out and give feedback here.

Unfortunatelly this issue has not been changed. Lets hope for the next update.

This has bothered me from the start. There seems to be an unintended delay before being able to reload. After finishing a magazine, I have to press the reload button 4-5 times before the reload animation begins.

If the devs want to slow down the gameplay tempo on purpose then just make the reload times longer. Because having a long delay makes it seem like it isn’t working correctly. Players should feel like they’re in control, and this makes it feel like there is a disconnect between the player and character. Feels awkward.

***I tested some more and know what it is.
You can’t reload until you are no longer sighted in. You should be able to reload while sighted in, or at least while in the process of dropping the weapon at your side.

Then there is something wrong. When I push reload it immediatly reloads. I’m on Pc and play Solo.

Interesting. Alright maybe I’ll redownload and try it again. Thanks

Ive had the same issue, I think ist a controller problem.

Well I’m on pc so it might be a game issue.

I don’t know what kind of keyboard you are using, but some keyboards (especially cheap ones) have limits as to how many keys can be pressed simultaneously. If you are sprint-running backward and sideways, the reload key might not register with such a keyboard. This is rare, but I thought I would throw this out there as a possibility.

I tested some more and know what it is.

You can’t reload until you are no longer sighted in. You should be able to reload while sighted in, or at least while in the process of dropping the weapon at your side.