Hello and welcome to the change list for our May Update. The first section covers some features and improvements that we wanted to go into a little more detail on, but continue reading for the full patch notes! 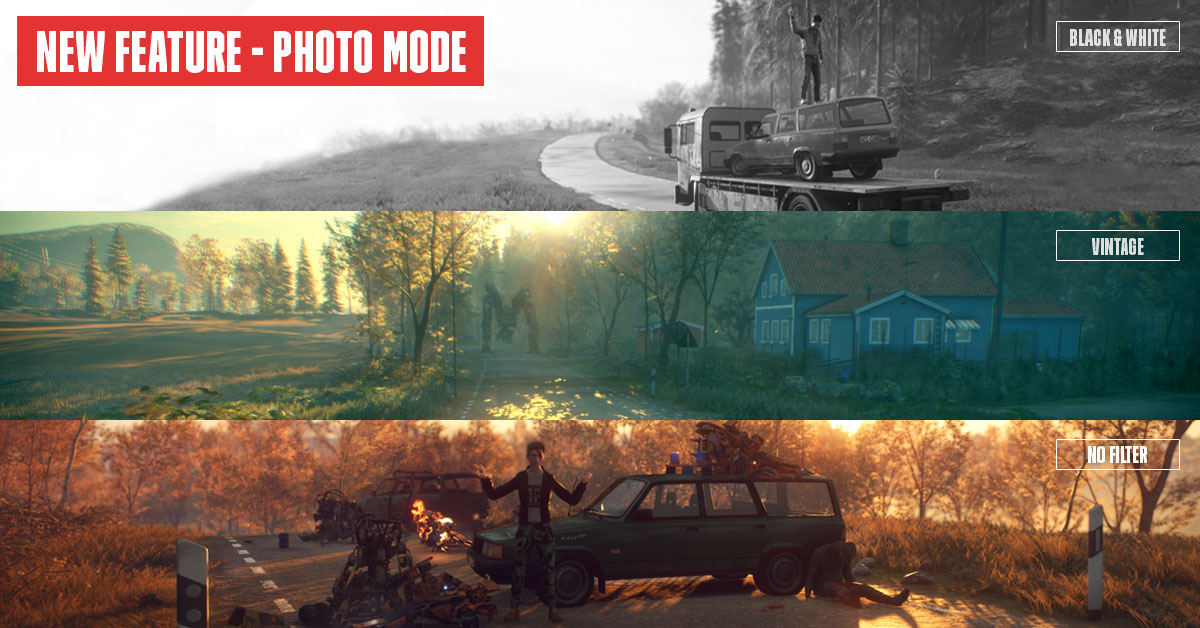 We’ve received tons of comments about how great the world looks, and Photo Mode allows you to really make the most of it. This has been in our heads for some time and we’re happy to bring it to you now! Please feedback and let us know how we can improve on it. And don’t forget to share your new photos!

Photo mode can be open either via the emote wheel or main menu.

Skill Screen Revamp
We improved the look and feel of the page, as well as made the skills more easily understood at a glance.

Intro Island Improvements
We’ve taken a look at player feedback, as well as our own data, and saw a lot of people were not getting a good feel for the game during their initial experience. We’ve gone back and looked at ways to improve the feeling of the starting area to give new players a better understanding of the variety the game holds later on. We’re evaluating how these changes affect player behavior in this limited capacity as we know that the denseness of the experience in the game is something that is called out by all players. Going forward we plan to explore other ways of filling up the world, so consider this the start. The main changes to mention are:

Scenes
As you explore you’ll come across small “set pieces”, each telling a small visual story about the moments as the machines took over. Oh, and there’s loot to be found for your efforts!
World Simulation Tweaks - Machine spawns have been tuned and now include more variety

Sprint Run Toggle PC (Community Feedback)
We’ve worked to make sprinting a bit easier on the fingers. You can now toggle sprint on so you don’t need to hold down shift as you run.

Pansarvärnsgevär 90 (Pvg 90) Iron Sights
Every weapon should be able to use iron-sights if you don’t have a scope. Happy hunting!

Tick Spawn In Building Interiors
Adding some suspense and surprise into the world!

Explosive Damage Tweaks
Explosive damage wasn’t behaving properly when it came to machines and their components. As of now, the damage will be applied correctly and should make explosive weaponry feel much more consistent.

Sprinting Heartbeat (Community Feedback)
We’ve heard the feedback on the heart beat sound being too loud and staying on the entire time you sprint. In response we’ve lowered the sound and re-worked it so that the sound gets quieter over prolonged running.

Save Game Backups (PC only)
In an attempt to help protect against lost save games, we now create both a savegame and a savegame.bac file. If the main savegame file becomes broken or corrupted the game will instead load from the .bac version. When this happens you’ll see a notification when launching the game. If this backup system should be needed a small amount of gameplay may be lost, but this will be extremely minor, perhaps just a few minutes. We are also investigating this feature for consoles, but have no ETA at this time.

Persistent Loot
Single items - Items outside loot containers, such as weapons and medpacks found at some safe houses, can now only be looted once per player

Containers - Will no longer respawn immediately on relog/fast travel. You’ll need to move between areas to loot efficiently. Loot will however begin to spawn again in cleared areas once a few hours have passed.

Loot Balancing
We’ve tweaked the amount of loot depending on region. Harder regions offer more loot while easier regions/starting area offer less loot. Our intent was to not overwhelm new players, while allowing players who have advanced farther to get their hands on more things that will help them against the increasing Machine threat in later regions.

Location Loot Counters
Location summaries no longer include loot boxes as it created a sense that you had to loot all the random containers in an area. It was confusing and didn’t offer much to the experience.

Character
The third-person pose shown when holding a Sjöqvist shotgun has been fixed to show the correct one.
The character preview when starting a new character sometimes did not accurately reflect the options that were selected

Missions
Some of these mission fixes will correct issues for those attempting missions for the first time or those who are playing a fresh save. We understand how important these fixes are for currently stuck players and we’re working to correct these retroactively in our next update. By re-working our Mission system under-the-hood, we will be correcting current issues and helping to future-proof new missions.

”, “PlayStation” are registered trademarks of Sony Interactive Entertainment Inc. Xsolla is a cross-platform billing and monetization solution for video game developer and publishers.

Will this update fix the Uttern Bunker glitch? Many players including myself are stuck on finding the bunker codes. Even after finding them, the mission never updates which leaves us unable to access the warboard there.

Has this update addressed the issue with the “Flying Blind” mission, where you can’t finish it if you lock pick before getting the key and then not being able to get back in the room later to try and finish it?

I hope so ollywalk, that mission has had glitches since March.
Id like to be able to finish it.

Now I haven’t tested the new update yet, but…

It’s no longer possible for uninvited players to join your game with the “Invite Only” setting turned on.

this wasn’t so much the issue for me as it was the game not saving that setting change and keeping it, I had to set it each time I launched the game. So unless I am misunderstanding this part I hope that it’s now saving the player’s settings for that option.

Wow alot of patches …also so ppl know on pc it’s a 8.3gb update presume around same on console

Just read the patch notes…so a lot seems to have been done for new players but what of day one players? I’m stuck in several missions and it seems it’s going to continue until a new patch. Too bad.

The disappearing world mission ‘bug’ is still ignored and not looked into, oh well, another month of me not playing this game then

I pointed this out in a post that had 14 likes. Which was then removed.

It seems like they are making improvements for future buyers, rather than day one buyers.

I felt all game breaking mission bugs should be priority, clearly they think otherwise.

Well this update sounds great but is the most broken update i’ve ever seen. game just crashes immediately when selecting anything. kinda bummed but hopefully there will be a quick fix soon…

I’m so happy that they corrected the damage of the Tick.
And the power of the Tank…

That’s no small thing with around 100 hours and last night was close to just throwing the thing out due to 6 or 7 hunters just walking through a barn wall.

Even though I’m whining about my bugbear some of the longstanding issues may require a stupidly large amount of work to avoid breaking things even more.

Now there are some decent fixes in this update like the auto aim locking onto dead enemies being fixed (maybe) but again, nothing about stability like extreme fps drops and screen tear. However, certain other key issues are still not listed. The Fashionista trophy was not mentioned so I assume that is still unobtainable, some missions like Flying Blind or To the Lighthouse for example were not mentioned and I know lots of people have said these missions are bugged (To the Lighthouse is the only mission I cannot complete in my case). Also no mention of the low sensitivity when ADS with a scope for the assault rifles, revolver, smg etc. Again, I don’t want to sound negative and the devs have seemed to iron out some of the issues which is a step in the right direction but things such as stability should be a #1 priority. New players will give up with the game if they start experiencing huge, constant fps drops, enemies clipping through walls, unable to use scopes on console due to low sensitivity bug etc. I’ll give this update a go and check out the changes for myself as the fps issues could of been fixed but just not mentioned.

Played for about 30 minutes and the game crashed twice. Second time I was just walking through a mostly empty area (far west on Norra Saltholmen) with no bots around.

It’s exactly the same crap as before!
So, maybe the game will work next month? Or maybe the month after that?

If this is supposed to be a joke, nobody is laughing.

Now I haven’t tested the new update yet, but…

It’s no longer possible for uninvited players to join your game with the “Invite Only” setting turned on.

this wasn’t so much the issue for me as it was the game not saving that setting change and keeping it, I had to set it each time I launched the game. So unless I am misunderstanding this part I hope that it’s now saving the player’s settings for that option.

Tick Spawn In Building Interiors
Adding some suspense and surprise into the world!

yes please, and thank you

The disappearing world mission ‘bug’ is still ignored and not looked into, oh well, another month of me not playing this game then

are you referring to incomplete missions disappearing after joining a multiplayer game? because this update fixed that for me (PC) I didn’t get lost missions back but I tested it out with my current save and they stayed. I also made a new save and tested it out on the Old Bettan mission. didn’t lose it like I normally would have

For the love of everything, please make this a PERMANENT save option. I NEVER want randoms joining my game. And it seems the majority of people are asking for the same thing. It’s not just between sessions we want this change, but we want it permanently. If I want to play coop, I invite friends. Otherwise, I don’t want anyone just joining my game. Ever. Why do I have to go and set this EVERY SINGLE TIME I start a new game?

Also, the audio language. I don’t speak Swedish. You have the option for English. Why do I have to go into that menu EVERY SINGLE TIME I start the damn game and select this? Is there an expectation that I’ve suddenly learned the language between sessions? I want the language I speak to be my permanent selection, like with every other game on the planet that has language options.

So far, I can’t say I’m impressed with what’s been “fixed”. Most of the stuff that was broken is still broken today, except it doesn’t seem quite a bad for new players just buying the game. This patch reeks of poor sales and too many refunds for a broken game so the changes are in place to make it look less broken for new players.