Basically the new inventory system has made it a hell to change ammo types on the fly.
It now requires 3 to 4 clicks to achieve that, from the previous drag and drop, and in combat that is life or death.

I thought at first the game needs to automatically load the next ammo type when the current one in use runs out but then I thought, no, that would defeat the purpose of having multiple types of ammo, as you would just be shooting uninterruptedly as long as you had ammo for a weapon, so…

You guys need to add a key bind to choose ammo type, so that when held down, a circle menu pops up like the one used for Emotes which would list the ammo types currently carried for that particular weapon, to switch the type of ammo on the fly.

I can’t stress how paramount this is right now for combat! This needs to happen like in a few days or it will aggravate players to no ends!
I’m already frustrated.

And for the love of God, allow the re-bind of the scroll wheel I have been using MWD (Mouse Wheel Down) to reload since CS:CZ, it just feels natural to me to pull the wheel down and with that pull the mag down out of the gun.

New Inventory Issues/Solutions/Feedback Quick Feedback Video, Inventory first impressions Inventory button configuration - March 2020 update Xbox One bugs after March 2020 Don't like the new inventory one little bit After 30 hours, some feedback on inventory Scope quality no longer visible in the UI [FEEDBACK] Ammo being picked up automatically when a weapon is picked up; Applys to: new inventory Streamlined inventory management New Features (Weapons, vehicles, machines & mores) What the hell is up with the new inventory menu?
Starke 2020-03-23 22:18:51 UTC #2

Adding a mouse over that displays the available ammo types for a weapon to the main inventory screen would probably be enough. But, at present, yeah, changing ammo types is deep in the UI, and if you do, accidentally, click on the gun to swap ammo types, you’ll unequip it.

what the actual…
So to change ammo, I now need to

I just lost the will to play. And here I was, so excited for the new update.

This must be a bug right?
devs intended all available ammo types to appear, and be swappable after step 4) right?
I could live with that at least.

better yet, for weapons, add a button “ammo” at step 3)

There is no ammo swap buttons;
No extra hotkeys;
No sorting;
No “mark as junk” (like in Division);
No “big picture” of your inventory (like old grid system);
No way for new players to know what ammo is for what;

Turned GZ on for the first time this year, well… got to have to wait for a few months longer I guess

I want to cry. The new inventory system isn’t just awkward, it’s a kick in the stomach. For me, slot 3 was always wasted, since I only use the handgun to shoot out lamps and TVs I can’t turn off. So I was stuck juggling my remaining weapons slots. Slot 1 is my close combat AG4 and Slot 2 is where I juggle a Rocket Launcher and the 50 Cal. I’m at the point of uninstalling this game.

No, because when you click on the weapon, you unequip it. You need to hover over it and press F… :\

If I’m bluntly honest? It would make sense to allow us to slot more than three weapons with the new system. Just let us hotkey whatever we want from 1 to +. Hell, let us hotkey even more if we set the bindings.

The entire structure of, two slots for primaries and a pistol made more sense when we actually had a slot system.

I just wish I could get my guns to show as equiped. spent 30 minutes to figure out how to change things around then finally got the equip list ok, then tried to switch to the guns in slots 1 or 2 and it is less than 50/50 if they will work. won’t show on hud and wont select to use. cannot play a shooting game without guns working.

It’d work if our inventory was sorted somehow. When I first read the notes, my impression was it would be it’d work something like this: 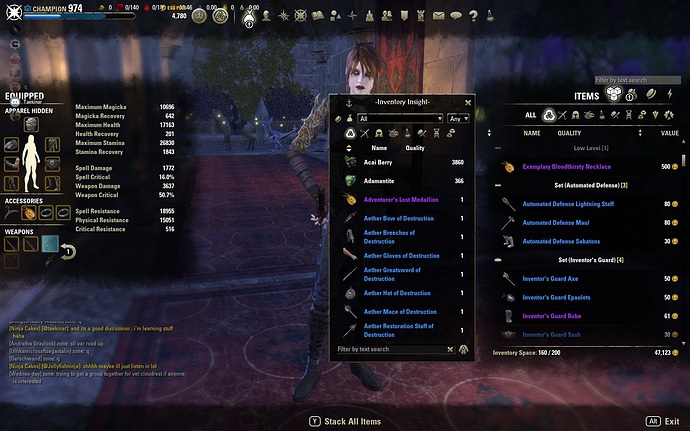 Clearly not what we got, though.

I really don’t like the new inventory.
I hate scrolling in lists, reading text, unable to get a grasp of what I’m actually carrying. hate it.
I don’t want to micro manage weight, that’s just harsh.

bring back the slot based inventory.
Make things infinitely stackable.
Slot based was good. it had it’s flaws, and could have been great if improved.
make crafting materials a list separate from the inventory, but just drop the weight thing.

I’m not playing until next patch. flipping hell. I hope you fix this.

Jesus that is awful.

Same sentiments with everyone here, the new inventory system is terrible. I understand you want to organize things, but this is not the way to execute it. Give us the option to switch it to the new view and another to switch back to the old view which we’ve all been using for the past year. How am I supposed to QUICKLY change to different types of ammunition on the fly?

The Grid style of inventory has been working since day 1. Why change it if it’s not broken? I do like the fact you get the see everything in your inventory in one glance. The Plundra organization would help greatly if it was also in a grid format so you can see it all with one glance. Have you ever played World of Warcraft? The Guild’s bank pages have grid style inventory and with tabbed pages where you can arrange things in a specific way. That’s the type of inventory management that might work well here.

I’m not a fan of new inventory system either. It makes everything seem overly complicated and makes tasks that were previously easy and fast - slow and tedious.

As far as inventory weight goes, you can pass the max weight limit but it has a downside - you can’t sprint anymore, which makes sense.

How far you can surpass it - that i don’t know.

I only play on the PS4, but i have to say this is not good at all, the inventory just needed a fast method to switch ammo types and for items of the same type to stock.
Obviously this took the developers time money and effort, i do not understand why they went this way,the inventory is not the best for this type of game, takes too much time to change ammo, attachments or to change weapons and it complicates things during battles or near enemies.
I will keep supporting the game with any future island expansion DLC, but this is a letdown

What is so funny here is that when I said I liked what is on PC the old system & will become the old system on console here in the forums I was ridiculed & mocked as the lone voice… The game IMHO needs bug fixes of what we already have way before new content.

Let me give all here an old saying “Be careful what you wish for, you may receive it”

Let me give all here an old saying “Be careful what you wish for, you may receive it”

It may apply to those who actually wanted inventory revamp but not all of us in this topic didn’t want that. I, for one, didn’t ask any inventory redesign. I’m here just along for the ride, expressing my dislikes about the new system.

New inventory system does have it’s pros, though, it takes some getting used to. E.g:

Hope there is a stream coming up soon. Would be interested to see how the new inventory is handled by the devs playing live. I will say this, it was a big update that seemed to try and address some needs and a lot of wants for the community. Just needs a little polish.

I think the new inventory is ok but one thing i would want is that the weapon attachments that are used is hidden in the inventory. its confusing to see them when they are already in use.

An idea for swapping ammo on the go is a similar system with rust , when you keep presing the reload button for a little more you get a “wheel” menu that shows you all the ammo types available and you can equip them .

I like the new system, but it’s fair to say it could use some improvement. Swapping ammo on the fly would be fantastic, like with the press of a button. Lots of good feedback in this thread already, just remember to keep it civil guys and gals