Can we have some sort of death penalty when we die please? My friends ruin this game for me as they just place a field radio and play it like some Deathmatch FPS game where they just respawn when they die. I was hoping there was like a deduction to xp when one dies and having an adrenaline negates this penalty so that at least they would avoid dying than just placing a field radio or fighting near safe houses to infinitely respawn and kill all the machines. This is no fun at all. It ruins the survival feel of the game too.

This is controversial thing, forcing other players to play like you want to game to be played. Dont get me wrong, i am not judging yours or theirs play style. All play styles in confine of the game mechanics are correct ones. Adapt, learn and evolve the game play with your friend(s).

Spawning is the mechanic in the game, and death or going down really doesn’t have any drawback. And it can be used the way you say, just respawn if you are fighting next to safe house. Only situation if you run out of field radios and have to run travel long distance.

Giving player penalty of dying would make some players really frustrated and angry.

To be honest my playstyle usually involves safe houses and respawning after being downed to reserve the medkits (although there are still too many even in Guerilla mode) but then I prefer to play alone.

Maybe you could arrange some play rules with your buddies to at least try to stay alive. (On the other hand being downed and respawn pushes rivals even further.)

I hope the dev team might include an ironman option for any difficulty setting. I’d hesitate to use it because I sometimes die really stupid deaths

Even more options could be implemented like the availability of certain items like adrenaline shots, field radios, weapon types etc. So anybody could adjust the game to her/his preferred playstyle.

When i play GZ and there are players who’s gameplay doesn’t suit mine and my own gameplay experience suffers due to this then i don’t play with those people again. I’d rather find new people with whom i can enjoy the game or play solo.

I also try my hardest not to drop down (die). It adds quite a lot to the gameplay where i need to use different tactics.

Your numbers are pretty good, not sure if i could compete with that.

The new Guerilla setting has totally ruined my kd ratio. Not because machines are much harder (they are, ALOT) But more because the sheer numbers of them. Once you start a fight you can almost be sure there will be bots comming at you from all directions, and nothing is safe any more. Hence tactics is more or less out the window and its FPS style all the way. 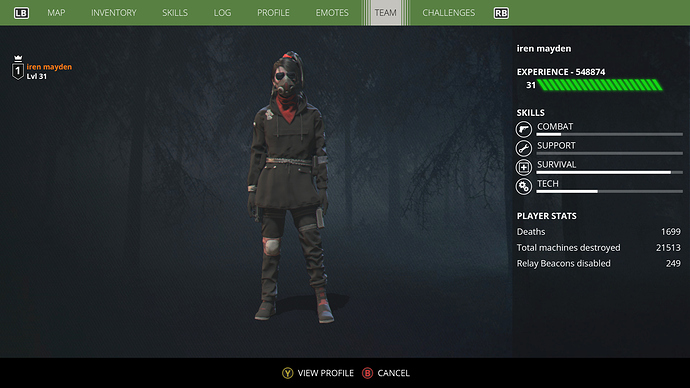 i did quit my main game (destiny franchise) for lack off fun, too repetitive and pricey, so im sure my numbers will grow. really liking this game!!

But more because the sheer numbers of them.

I also play on Guerilla and haven’t noticed that there would be more machines when compared to Skirmish. Then again, it all depends if you’re in one of the hotspots or not.

Hardest thing on Guerilla, for me, is staying alive since several machines can one-shot you and also drain your HP even before you have time to react. Due to that, i’ve also gained quite a few deaths lately and i’ve almost run out of first aid kits. Other than that, i like Guerilla. Also, i now need to use far more cover than before, which i actually like (e.g fortress defense style - me in the house, machine armada outside).

As far as death penalty goes, it could be gradual and different depending on difficulty level. E.g:

Note:
respawn = spawn in safehouse
revive = spawn using adrenaline shot or when someone else revives you

This penalty system gives a lot of value for using a-shots and first aid kits, especially on higher difficulties.

Then again, it all depends if you’re in one of the hotspots or not.

There are (According to me) alot more roaming robots on guerilla, and it also feels like some gets teleported in (dogs mostly) if the fight isnt over fast enough.

and +1 on medkit shortage. Ammo shortage is totally gone (the skill helps alot) but medkits is also vital to be able to continue fighting since guerilla difficulty more or less ensures you always take some damage per robot.

They also changed to cooldown and the pattern when the Robots (especially hunters and dogs) use their main gun.

v1: Robotos always stopped completely before firing. Very easy to learn and exploit.
v2: Robots now starts to stop before fireing the maingun. There is still a period from the stopping animation starts until the robot fires. Abit harder, robots fire abit faster, but nothing you couldn’t get used to.
v3 (now, Guerilla difficulty): Robot can fire their main gun anytime as long as they see you. There is no CD or warning. Practically impossible to be able to play safe against. Much more cover is needed, and no more fun run and gun session with several hunters. they are now practically impossible to do.

Buckshot dogs are deadly, they can fire 2-3 shots within 2 sec and more or less instakill you.

Tanks fire their mortars/barrages much more frequently now, and sometimes they ignore they lost line of sight, with a BIG damage boost as well.

Not sure this was the increase in difficulty I wanted.

I think it is especially sad the the movement of Robots (especially dogs) has become more and more unrealistic to increase difficulty.

I would add penalty XP buffer, like you would got negative XP. But instead of that it would just halt your progress for the duration you gain the the penalty XP. You dont loose skill points or any of your current XP. This penalty buffer is just extra what you have to deal with.

Example, you die. You get 1000 XP penalty buffer. You do mission and kill machines until this 1000 XP reach 0 XP. After that you would again progress forward.

(This system is used in 7 Days To Die for same reasons as in this game, death didn’t have any penalty, and players even committed suicides when they got sick or infected by zombies.)

I would add penalty XP buffer, like you would got negative XP. But instead of that it would just halt your progress for the duration you gain the the penalty XP. You dont loose skill points or any of your current XP. This penalty buffer is just extra what you have to deal with.

Example, you die. You get 1000 XP penalty buffer. You do mission and kill machines until this 1000 XP reach 0 XP. After that you would again progress forward.

(This system is used in 7 Days To Die for same reasons as in this game, death didn’t have any penalty, and players even committed suicides when they got sick or infected by zombies.)

The reason why it works well in 7D2D is because in there, the level cap limit is very high and it takes a long time to achieve lvl 200 (i guess it was the max, not sure since i’m only lvl 56 in there). And when you die, you’ll loose 10% of the XP you’ve collected so far since leveling up (A18.2).

In GZ, level cap comes at lvl 31 which isn’t that time consuming to achieve (especially when comparing to 7D2D). And the XP loss only hurts players who aren’t max lvl.
Once player reaches max lvl and given the fact that you can not loose obtained level and skill points, the system completely stops. This leaves the same situation as now, but only with a difference where max lvl players can abuse the 100 HP respawn and everyone else can’t without loosing something.

I’ve always thought the adrenaline shot should “prevent” you from dying, thus allowing a player to create a personal no-death challenge, maybe get awarded for staying alive over time. I strive for this goal every restart but unfortunately the robots continue to morph into places they shouldn’t and creep behind me. Wish it worked this way. oh well…

Since we now have the June Update going for some time now and difficulty changed quite a bit in favour of the players, I am going to warm this topic up since I find it rather interesting to hear thoughts and ideas about it.
From my point of view an XP penalty could be a tickbox, as in choice, for the Skirmish and Guerilla difficulty, as Aesyle suggested. Since this is a singleplayer game as well as a multiplayer game, the host of a multiplayer game could use that tickbox as well. However, making it mandatory to loose xp in a game as unbalanced and buggy as this - Don’t get me wrong! I love the game, but it seriously has some issues when it comes to when and why I die - is not a good idea in my opinion. Making it a choice though, would be grand and give players more challenge or more incentive to keep it “immersed” and not go rambo in every MP game.

Furthermore, if a singeplayer game has exploits - why not avoid them? There is no need to use them! For multiplayer I absolutely understand the issue though.

What else could we want as choice based tickboxes, since we are talking about player agency in terms of difficulty?

I keep thinking of games like XCOM or rogue-like games where permadeath and ironman (only 1 savegame) are often choices on the players side to add extra challenge and make choices more meaningful. Enabling 1-Life runs, limit safe house use per session/hour/player count or other things could be cool for Generation Zero and add replayability even for those who did all the things already ^.^

Environment and the game is not that bug free. 1/3 of my deaths are environment related. Cars explode right outside buildings killing me, gas canisters side of house, etc.
Even current sprint bug can cause your death because you cannot avoid incoming rocket salvo, mortar etc.

Sure you could avoid all of these planning meticulously carefully, but same time killing fun and enjoyment of the game itself.

Well, a few ago, I got an idea: Each time one dies, he loses permantly a skill.
This skill can be earned back through making enough exp, to rebuy it.

Also… since no respec, this system could be used to get rid of unwanted skills, if the last bought skill is removed.

This will make earning more Exp relevant again, after being maxed out.
Thoughts?

That but the loss of safehouse. There’s no reason to forget where is the safehouse. Maybe you just can’t fast travel to it because of the combat in the region or in a 500m radius of the combat if it happen in the border. And no xp if the combat end while you are out of it. Oh, the rage!

And maybe the adoption of armor? A balistic armor, breakable, which degrades when hit and needs maintenance to function properly, just like Doom or The Divison. Did Sweden have something like this in the 80s?

If you play at max difficulty you haven’t so much ammo for a dead match I think… Penalty only at easiest difficulty and only as an option. There are too many bugs snd problems in this game and we don’t need more penalty… I didn’t play the game from my last game two weeks ago because the problems…