I just thought about how the weapon packs are implemented into the game and that I’m not happy about getting ammo, ammo-scematics and a 3c version of each gun instantly and the other guns randomly as loot from the machines.

Describtion of request
Somehow these weapons, as support for the resistance, have found its way to the isles.

Players who start from the scratch and own the packs immediatly have some good weapons just from the beginning, while other players had to progress through the whole story by evolving through the story, the locations and defeated enemies.

What if the weapon-pack weapons would be provided through support deliveries by air?

There could be a ingame-message that new equipment will be provided. By pressing square (on Playstation) you could jump right into the map and will see where on the map and from which faction (US or soviet) a new delivery arrives.

These messages and therefore these deliveries could come randomly maybe once or twice per weapon-pack a day and just include weapons, attachments and/or ammo from the owned weapon-packs.

There could be a small marker on the map like the rivals have… Or a small radius in which you have to search for. The marker or radius also shows a small icon (soviet / US).

If you reach the place (which should always be at least 1km or mile away from the players location) you find a box or some crates in a net with a parachute on the ground or hanging in a tree / at a house (but always reachable).

This boxes / crates etc could disappear a few minutes after looting them or when the next delivery arrives.

There could also be a countdown-timer that shows the remaining time until the next delivery or until a package disappears (because the enemies destroyed it).

Now you would have additional fun by chasing these deliveries with a chance for high-classed attachments, weapons or a great amount of ammo for them and the implementation would be ways more logical.

And of course there would be more worth out of these weapon-packs as it would be some kind of a new mission-type.

Additionally new players who start directly with one or more weapon-packs will have a closer experience to the players, who started without any weapon-pack (and without any worthy weapon right from the starting location).

Please support this idea. It’s for the players… and I guess the game and the devs would benefit of this too.

Edit: Here an example how it could like on the map 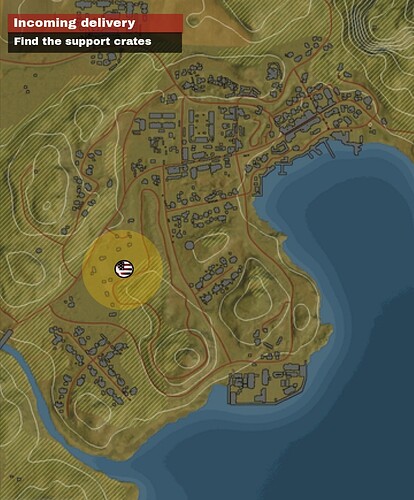 I agree, I find it weird that both these high power weapons are given to players right out of the gate and they have no in-game story. The only story Is on the game page in whatever store you purchased it in.

I think that’s a great idea. It really ruins emmersion if a random teen has access to military grade weaponry right out if the gate.

Great idea more or less, I would not like to see to high tier in the drops or at least that higher tier equipment is really rare.

I remember when I started the game and you had nothing but what you found on the way out of the archipelago, this made the enemies really intimidating and fear was indeed a factor.

Starting from scratch with all the DLC weapons would have definitely impaired this feeling.