I’m a little at the end of my tether here. I really want to play this game, I really do, but it just chews up all of my CPU and proceeds to thencrash anywhere between five minutes to an hour later. I’ve barely made any progress and frankly I just want to know what to do to fix this and play smoothly.

You’re not the only one. Most people playing on Windows 7 and/or an i5 processor have similar issues (myself included). For some reason the devs are being very quiet about this. Hopefully that means that they’re doing their very best trying to fix this and don’t have time to reply, but in case they’re just trying to ignore it I’m going to continue cross-referencing other posts until we hear from them.

It appears that we’ve actually got a reply from the devs, though it wasn’t that apparent and you had to actively look for it in order to find it: Wheres the Devs?

I can relate to the 100% usage of both cpu and gpu and i would say i pretty much got top of the line specs. As the game currently stands its unplayeable. That is sad because i really want to love the game and i do love it when is working for about 5-10min.
specs

I also have the 100% GPU and CPU issue that overheats my water cooled PC after so many minutes of play time. Are they ever going to look into this I wonder? I see some think it’s just an I5 and Windows 7 issue, no it’s an extreme CPU and GPU over-usage issue.

I experienced severe stuttering right from the very start. The game locking up for several seconds and then running at good framerate for a short while and then locking up again. CPU load was pretty much 100% on 3 out of 4 cores. This was the case regardless of what settings I tried and with the May patch.

In my case, I simply requested a refund through Steam and I got my money back since I had less than 30 mins playtime. It’s not a big deal, but I’m hoping this will be fixed eventually so that I can play the game too.

Its happning to all platforms.

Something they did in the 1.03 broke performance all to hell for all platforms. Before that, performance was excellent across the board. Since 1.03 dropped, performance has been crap. It’s been heavily noticed on consoles more than computers, it seems, but there have been performance dips on PC as well. Since 1.03, console players have been complaining to no end about slowdowns and stutters, and thay never happened before that patch.

For me, I used to play at 4K with RTX 2080 and get 70-ish fps. After 1.03, it dropped me down into the 40s and my GPU usage went through the roof. Now the best I can play is 1440p with 80-ish fps. Not bad or problematic for my gameplay by any means, but that’s a HUGE performance drop. My GPU is pegged at 100%, and my CPU (Ryzen 2700X) is used way more than it should be. My GPU fans are running like turbines and my system fans (AIO water cooled) go into overdrive. Even more detailed, more demaning games like Far Cry 5 / New Dawn don’t hammer the crap out of my system like that playing at 4k.

In this screen shot, I loaded up the game, went and stood still looking into a corner of the safe house at Yttervik. No enemies nearby, nothing happening at all. Just standing there staring into a corner. This is 1440p. 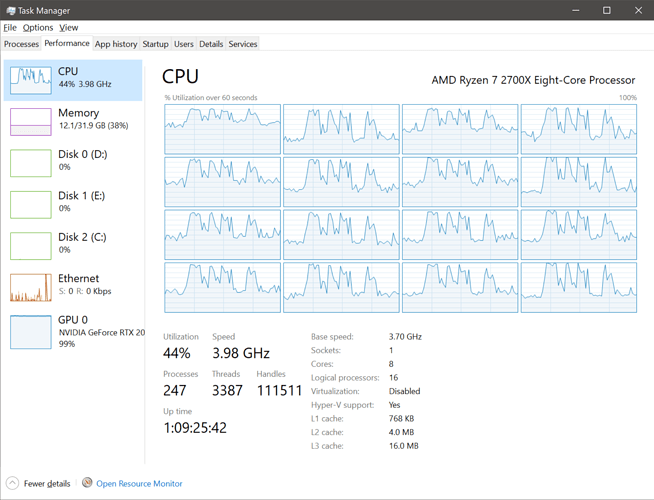 By contrast, this is a screen shot while running New Dawn at 4K (ultra settings) at 80-90 fps. In this, I was actually playing and in a good fight, so game AI using the CPU. The GPU gets a good workout, no doubt, but isn’t constantly pegged, and the CPU is taking some use, but nowhere near as much of a hit. And my system fans didn’t sound like my tower is about to produce thrust and get airborne.

Like I said, this issue was introduced in 1.03. That’s when all the performance complaints really started on all platforms.

You can see in my usage graph above that I’m getting huge spikes in CPU usage while doing nothing. I’d like to go out into a fight with something to show how heavy CPU use is, but I have no ammo and loot boxes are bugged out and not giving me anything. So as soon as I find enemies, I’m instantly dead.

Great info, Crunchmeister. I’m willing to bet that the CPU spikes are where my game just locks up for a few seconds until my system can “catch up”. Hence the severe stuttering.

I’m aware of the fact that my CPU isn’t that great, but when I’m seeing all the other complaints with regards to performance here (PS4 as well), I kinda feel the it’s not my CPU that’s at fault. Hell, even Star Citizen runs better on my system and that’s saying something.

Your CPU should run it just fine. One of my friends I play with has my old, computer (2 computers ago). It’s a 1st gen i7 920 with 18 GB triple channel RAM and a GTX 750Ti. He was able to run it fine at launch. Yeah, he had to turn down graphics detail into medium territory, but was able to run it at 1080p fine with acceptable frame rates. Since 1.03, he has to run it a minimum settings and even then it gets slow and choppy at times. 1.03 is what broke performance.

And you’re likely correct. Something causes the CPU to spike. As you can see on my performance graph, all 16 of my threads are spiking simultaneously. Most games only use a few cores at most. I don’t see how a game like this could be using 16 cores and maxing them out when absolutely nothing is happening in the game. When there is stuff happening, the CPU tends to stick at high usage most of the time, and occasionally with all cores pegged at 100%.

Is it because the map runs as a whole so enemies all over the map is using cpu theres no loading time at all.For example whenyou play gta or destiny theres checkpoints to load you in for a slight moment.Im just guessing tbh and trying to use my logic knowlege even tho it may suck lol

That may be the case. But the point still stands. This problem with CPU and GPU overload and overall performance issues on all platforms didn’t exist before 1.03. Something done in that update borked the performance for everyone.That’s the update where I took a 50% frame rate hit. That’s not normal.

The data is streamed from disc when you are walking or running across the landscape.

Certainly on consoles something made the lagging worse in May and it’s much more noticeable in the XBox One-S than the One-X.

This is ignoring when lots of enemies are nearby.

When you fast travel it has to load larger amounts of data in a single chunk so you get that nice long pause.

Hello! It seems that the June update is out now. Have anyone tested if the above mentioned performance problems have been fixed in this release?