The lore from only the 3 dolls I found is extraordinary it has so much lore that I don’t have the words for it. If you have all nesting dolls please post them all here please I would like to find out the entire lore but from the 4 that I found I discovered this.

Summary of the 4 i found.
Nesting Dolls 3 ‘Technical Issues’ :
There are 2 People who seem to be leading the invasion of Sweden, Captain Tatiana Tereshkova and someone going by the name of Bolshakov.
Captain Tersehkova leads the “Exoskeleton Detatchment Alpha” And in the 1st Nesting doll I found he describes his worries of the Swedish machines and how the data he was given on them seems inadequate. He seems worried about what would happen if the Soviet machines make contact. At the end he explains how he is ordering a couple scout teams south to make contact with survivors.

Nesting Doll 9 ‘For the Motherland’: Tereshkova calls himself former captain of Exoskeleton detachment alpha
Bolshakov seems to have betrayed part of the Soviet forces.
Bolshakov believes he is saving the Motherland and the Swedish machines are key to seizing back power. Tereshkova talks of how Bolshakov has his men’s blood on his hands. Tereshkova tells Bolshkov about his encounter with a machine which vowed to destroy anything that attempted to control it. During this Tereshkova is shot in the leg and the Train in the tunnels under Garphammar leaves exploding the tunnel behind it.
Tereshkova then climbs a nearby hill where he see a red blinking. A machine was waiting for him there and another Nesting doll is placed by it.

Nesting doll 9 ‘My Country’s Power’:
Tereshkova talks to the machine and how if he cannot destroy the computers Bolshakov is after. He attempts to search for any way to stop the “catastrophe”
The machine tells him his explosives aren’t big enough and only he has that kind of power.
It then allows him to regain contact with the Soviet Union upon which Tereshkova asks why the machine is doing this. “Every minute controlled is a minute of death”
He reaches his contact in the Soviet Union and gives a calling who seems nervous due to only 1 reason being to contact him.
Bleeding out he tells him to send it and it ends with the Sky filling with a mushroom cloud.

Nesting doll 10 ‘The Crater I Created’:
Up on a nearby tower Tereshkova watches the Nuclear explosion and describes seeing rogue Soviet machines to the North which have killed humans and swrdish machines. He prays that Bolshakov’s jamming is still In effect and that the Americans do not take this as a threat towards them.
He states his intent to try to find some remaining member of his men he sent further inland and reprogram the machines to their normal behavior of being incapable of shooting humans. He hopes to convince the swedish survivors that the situation that was created was not what they wished to achieve coming here.
He says he is going to try to clean up the mess that was made, he hopes his presence if he survives will do some good.

This explains how the crater in the centre of the Farmlands came to be and so much more. But also adds so many questions 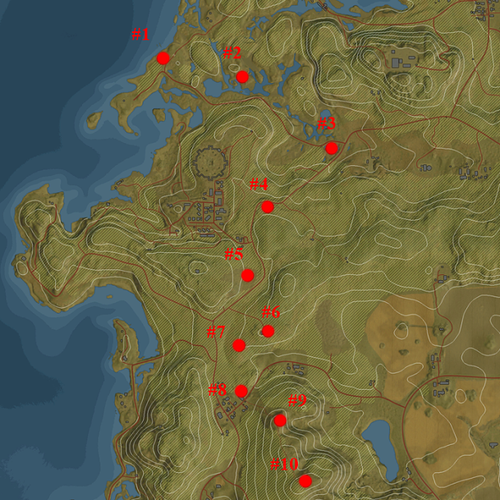 All dolls notes have been done as requested.

Now get the speculative-funk on.

Thank you very much @Gysbert
So we know that in Doll 8 Tersehkova confronts Bolshakov in the Railtunnel below Garphammar which I am going to assume is Underground Station C. This confirms that there is likely a network of rail tunnels under Ostertorn that had been theorised for some time.
The entire point of the Russian “Rescue” operation from the info in Doll 1, seems to be of getting a foothold, and making their way to Underground Station C where they believed there was a way to an “inner bunker” this I believe could be one of 2 places, the crater bunker in the Farmlands or it could be the locked bunkers under Normyrra Artillery base. I’m leaning towards option 1 as it is the location targeted by a Soviet nuclear weapon.

Is Tereshkova alive? In the Nesting Doll number 12, Tereshkova is alive but bleeding from his left leg. He states his intent to attempt to rally some of his scouts he sent south and try to regain control of the Russian machines.
Due to the fact there is a Paramedic response kit at the top of the Watchtower where Doll 12 is found I think it is fair to assume that Tereshkova is alive and may appear in the next big DLC.

Due to the fact there is a Paramedic response kit at the top of the Watchtower where Doll 12 is found I think it is fair to assume that Tereshkiva is alive and may appear in the next big DLC.

And it could be the big island!! Because the Lore mentions the US and they may get more involved than just weapons.

I Agree I think at some point a US presence will appear. But we have to realise the game has changed now. The USSR launched a nuke at Ostertorn. The US would probably be having a seizure over it

I must admit I was rather disappointed when I read that the Skinnarbol crater was supposedly caused by a russian nuclear missile… It’s just illogical!

For a nuke to cause such a limited amount of destruction, it would have to be very, very small. Probably no more than 0,1 kilotons. I’m not even sure missiles with that small nukes exist. So why not just use a conventional missile?

But, yes she is alive, fixed up by a mysterious talking machine (doll 10)

Low yield tactical nuke. Blast radius of about 500m and very low radiation. Both the US and the Soviets had them in the hundreds during the eighties.

There are also artilery nuke shells available, US, Russia and China have them, others will probably have them too, they have different blast radius.

There are also Nuclear Torpedos, but those of course can´t be used outside of Water.

And for last, homemade nuclear bombs, also called dirty bombs can have all types of sizes, blast radius and different components and compounds.

Lore suggests that is what Bolshakov was doing before the blast. Bolshakov could also be taking the underground train to another bunker with more computers with the capacity to reprogram the Sweden machines.

There was Sweden machines that were helping Tereshkova with intel and replaced his busted leg. Does that mean the Sweden machines could start being friends of the resistance instead of the enemy? Tereshkova is Soviet and there are perhaps Soviets in exo-suits that could be friend or foe.

I believe that there are also conventional (non-nuclear) weapons that yield an area of destruction as seen at the crater’s blast area. Without fallout.

He states his intent to attempt to rally some of his scouts he sent south and try to regain control of the Russian machines.

OMG, that would be the coolest thing if in the next DLC you got to hack and control Wolves. Fighting alongside a Wolf is already cool enough, but now they might be able to use their “bridge protocol” to help the player get around. Whatever it is. Do I dare hope to ride one?

On a side note, lets hope Bolshakov is actually dead…

Imma just mention this now. If we do get to hack / regain control / ride / or fight beside the Soviet machines, then it had better be for the whole game and not just for a certain mission. Maybe you should have to complete a certain mission to be able to hack them with your binoculars and fix them but it should definitely be for the whole game. Pls don’t just give this power to us for just one mission.

Maybe scout class Wolves should have some sort of small platform or railing on the side for soldiers to hold onto, kinda like the old Sherman tanks and stuff like that had. Not usable for the player, but a nice detail.

OK I was poking around Littorp and I found one of the Russian Dolls (on a hilltop with a camping area, wood pallets and bed) the title was “We Promised Them Protection” and when I picked it up it didn’t show in log… maybe a mistake by the devs? I only found it because several Mechs were fighting (FNIX and Russian) and I wanted to get a good look before moving into the area… My guess is that next update will show more dolls…

We Promised Them Protection is the name of letter in the seventh bottle of the signs of a resistance collectables.

The closest hill around Littorp that also has a bed and pallets, is this one, however it has no doll. It has the 4th bottle. (see pic) 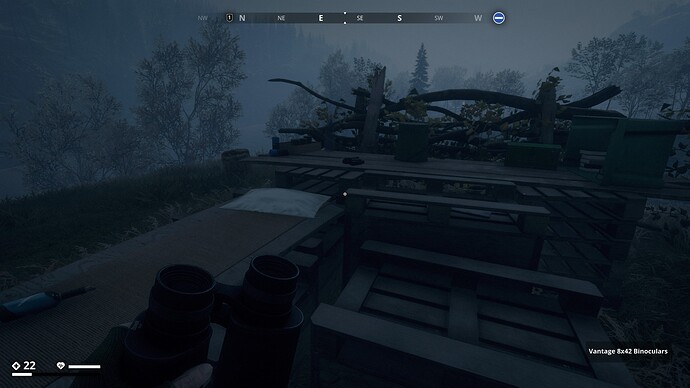 Or were you just over the border in the North Coast since there are machines fighting each other a lot and is close to Littorp?