What is your skill build?

Hmm gotta check that next time I run into some of them that are not radioactive !

And if not - it was good while it lasted!

I have 4x chars, ordered by from the oldest to newest (playing on PC): 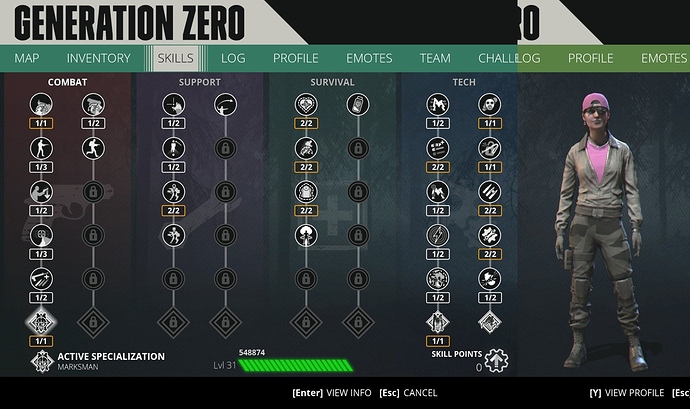 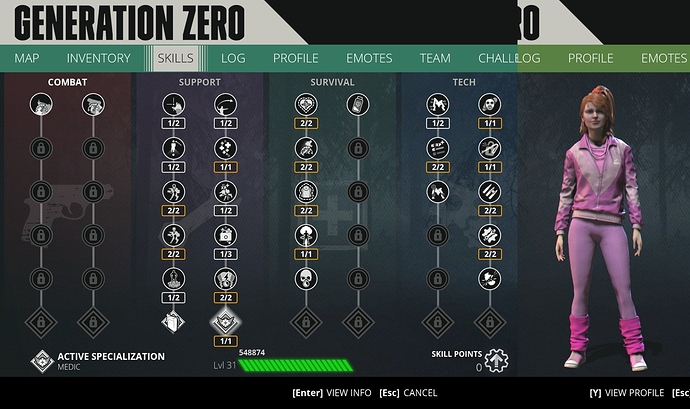 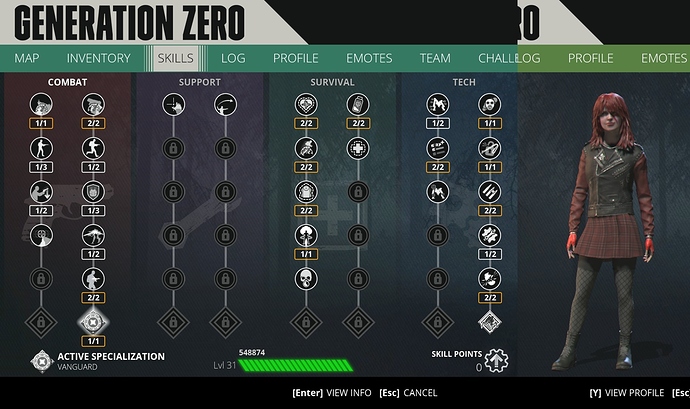 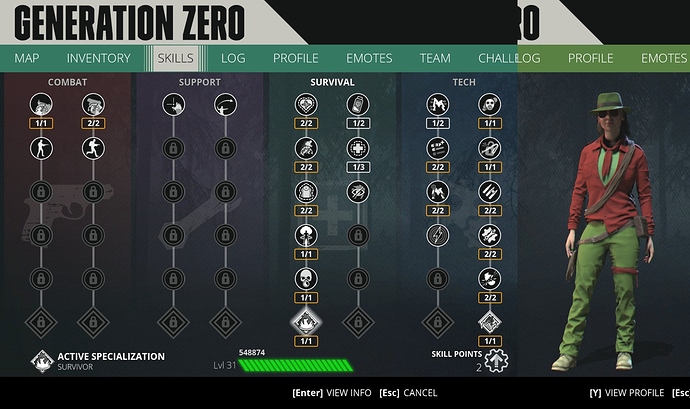 …and a female police officer

Here’s mine! I can say for sure I would LOVE to have TECH based builds join my game!

I’ve yet to see someone using the TICKS skill, that would be awesome! 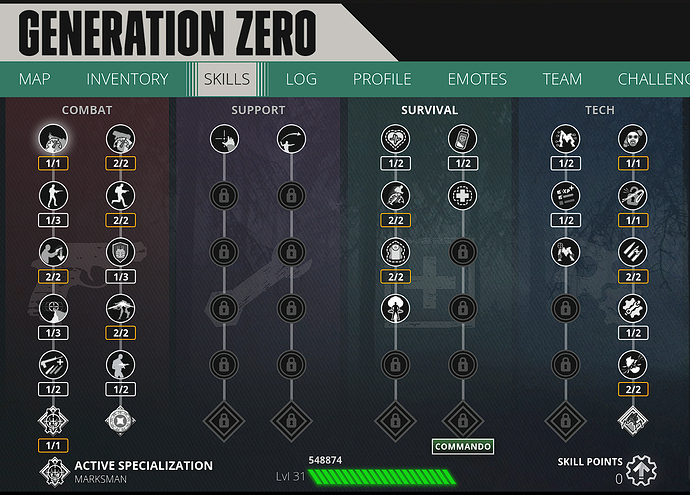 This is my only character besides a level 2 permadeath I’ve started. That one isn’t old enough to count.
I thought the level cap was 41 while I was building it and didn’t find out otherwise until I was 29.
My priority was survival, leathality (as a subclass of survival), and teamplay. My idea of survival is not getting killed, and killing other things quickly, so I went for damage reduction for me, and bonus damage for machines where I could. I thoguht I could work towards marksman which is the main reason I put skills in the left tree. I didn’t realise I put nothing into stealth.
Co-op came late for me. I built most of this for solo play, but then showed the game to two friends who bought it. I like support roles with a spicey DPS edge in team play, but I found that the way people play this game the healing skills didn’t seem that useful. I use a lot of flares and either utilities for support, and pop up at the last minute to explode things instead. It gets the job done.
If I built it over again, I’m not sure what I’d do differently. 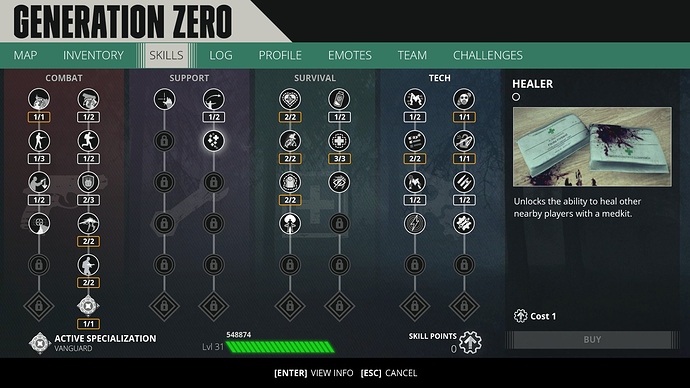 Can confirm that sadly tick immunity is gone and so is the gas immunity, it was really nice while they were around but i guess they can’t have us be running around in gas rooms and having ticks jump on our heads without any worries.

Hey, your Engineer is basically my build! I always wondered what to call it.

My idea of survival is not getting killed, and killing other things quickly, so I went for damage reduction for me, and bonus damage for machines where I could.

Now I’m a little more ok with my K/D.

Now I’m a little more ok with my K/D.

You have a spare skill point and it’s not in the health boost skill.

Going for learnable skills is a really nice idea, I like that. I’d argue though that it’s not so much a skill tree as it is an experience tree. We do a lot of running around Östertörn, it would do wonders for our stamina. Similarly given everything we put up with, I think our toughness would improve a little as well, or at least our attitude to it. That’s how I see the health boost ‘skill’ + being able to handle a knock and keep going. The same applying to learning to manage recoil or not get knocked down. Then again, I can also look at the health bar as a ‘luck meter’ for the times the bullets just missed. Sooner or later my luck runs out. 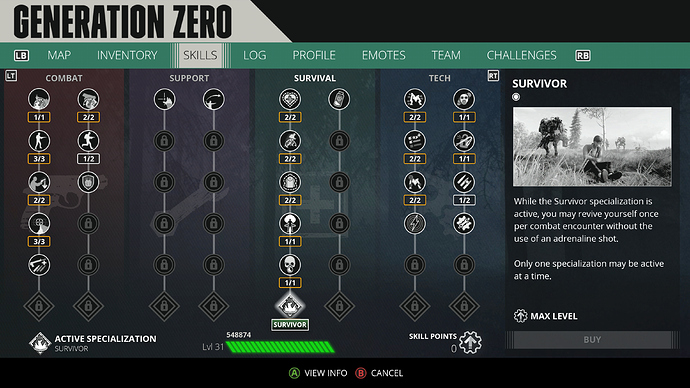 First I went for running speed / storage capacity, and then focused on that path to unlock the “survivor” perk, and along the way grabbed lock picking, and improved aim.

I hadn’t realised that the level cap kicked in at 31, so I thought I had a few levels to go. It was all pretty organic and not planned out, but it suits my play-style.

Looking back, I might have planned it a little different. My alts are all only around lvl 6 - 10 but the first few levels I’ve pretty much gone for the same first few.

We do a lot of running around Östertörn, it would do wonders for our stamina. Similarly given everything we put up with, I think our toughness would improve a little as well, or at least our attitude to it. That’s how I see the health boost ‘skill’ + being able to handle a knock and keep going. The same applying to learning to manage recoil or not get knocked down. Then again, I can also look at the health bar as a ‘luck meter’ for the times the bullets just missed. Sooner or later my luck runs out.

A lot can be explained with physical training and experience, e.g. in aiming. Both is fine for my interpretation of ‘learning’ (the body learns, too). Some of the combat skills would have been fine. But I needed the other ones as I felt I could do with my own physical combat (mouse) skills and the guns I find. I had trouble justifying growing iron skin and the like.

You have a spare skill point and it’s not in the health boost skill.

Yeah, I’m still undecided about that one. The tick specialization? Not sure if that is not too much fuzz for little benefit. Also I am basically done with the game. I started the DLC, but so far it has not really got me hooked.

I was running around with 11 skill points unspent for a while as I was already doing fine. At some point I grew tired of fighting, though, and bought some skills I could not really justify with my learning interpretation of skills. High standards out the window.

This is my main.
Has Marksman for sniping and Vanguard for running about and more hands-on encounters. Also had ticks immunity (which still seems to work on milticks sometimes, but no longer all the time, never did on FNIX splodeys, nor on the Apo scorpions).
3 points left over (in line with my assertion that most things beyond level 20 are “nice to have, but not critical”) as there isn’t anything I desperately want. If I played co-op more often, I might go for enemy marking, it’s a neat little quality of life thing.
So judging by the above, pretty cookie cutter. 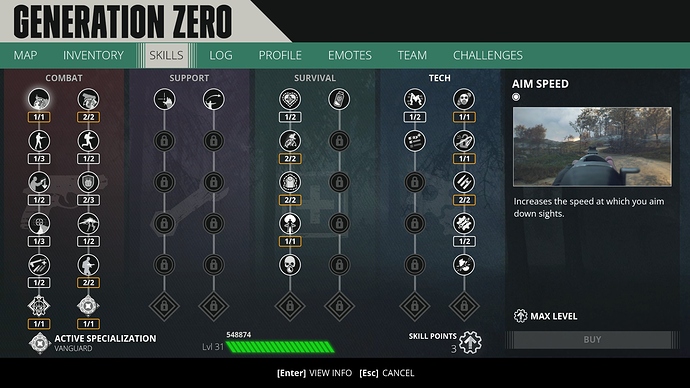 This is my original character (all the way back from beta).
Not too different though, except that she has tech all the way up to hacker, which in retrospect I consider a complete waste. She has some additional quality of life stuff like the aforementioned marking, but in the end, nothing that particularly matters. If anything, she misses Steady Feet.
In other words, the level 60 character from beta played largely like my level 30 character from the released game does now, informing my view that people saying “but if you removed the level cap, the game would become terribly unbalanced” very possibly don’t know what they’re talking about. 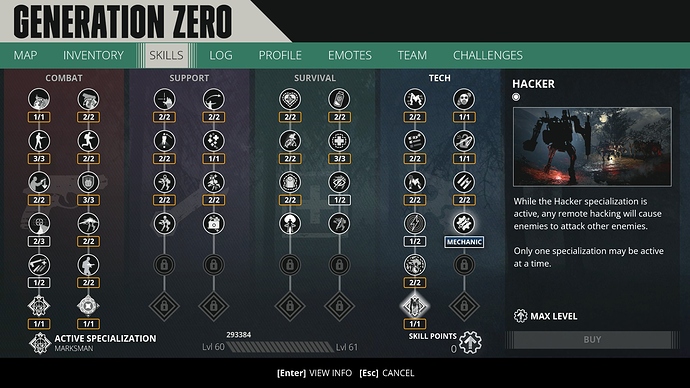 Here’s my second character. This time around, I wanted to focus a bit more on support for coop games.

I got both Marksman and Vanguard unlocked. For long range sniping I switch to Marksman, otherwise I mostly stay in Vanguard mode.

The support skills are Flanking (this skill may very well be the best skill in the game during coop!) and Enemy marking in combination with Designated target; 30 seconds with a 10% damage bonus from everyone is pretty sweet, and you can mark a bunch of targets at once.

As you can see I got one more level to go - your suggestions where to put that last point then? 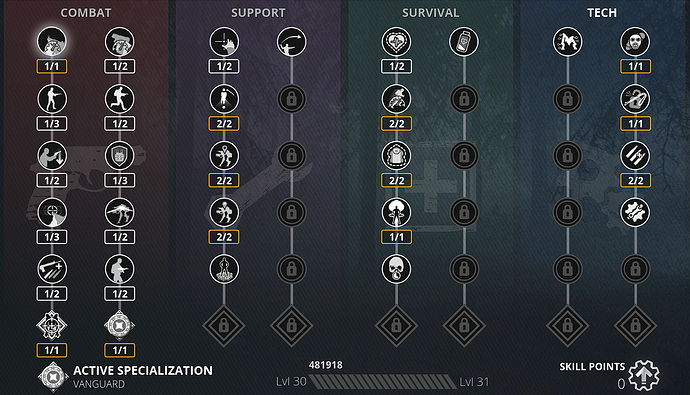 As you can see I got one more level to go - your suggestions where to put that last point then?

Since your char is combat focused, i’d put the last one into Reload Speed. Stamina Amount would also be a good choice if you want to sprint for longer.

I havn’t got a finished character(s) but these are my plans for two. Tomi Tapio, a tanky military and a snipy tech wiz, Nanouk Bjornsen.

Because the military is my first one he’s pretty stealthy from start but with better armour, ammo & guns he’ll progress to badass.

Also my tech woman is heavy into transhumanism so maybe she’ll alter him a bit with drugs, too (as she does on herself) but then again, he probably prefers to stay au natural I don’t know where that’s going.

Nanouk is only level 2 so far, so I have plenty of time to change my mind about her specs, but I am dying to try out getting robots to fight eachother from afar. If that doesn’t work well, marksman is an alternative.

Do you need your character to have skills that makes sense with who it is? Or is it mostly or only about effectivity, a smooth gameplay and optimization?

Hello, my Char Helldiver has the specification “Hacker” With the binoculars you can send a Hack impulse to a robot and they start to shoot themselve. But pay attention, in a little time they recognize you as the sender and they will hunt you. My second char Amelie makes an education to the marksman specification. Her fighting style is to sneak on to the robots and kill them from afar. Mostly with the PVG90 cal. 50 Sniper Rifle in Distances from 300 till 400 m.

But pay attention, in a little time they recognize you as the sender and they will hunt you.

Oh! That makes me hesitate to get Robot hacking for a frail character. Maybe I’ll rethink my builds. Tomi is already a bit sneaky and tech, he could be the snipy hacker one - and Anouk an enhanced, transhuman tank! That way I can make them more different from eachother, too.

(Not the right topic to discuss builds but…)

I think you need to know the value of Lockpicking skill.

Without the Lockpicking skill, you can’t open any of the ammo storage stations found in game. These ones:

There are few single door ones in the game, part of the missions, that you can enter and loot. But those found in the open world, are all locked.

However, there is a key for the smaller ones, which once collected, gives you access to the single door ammo storages, all of them. 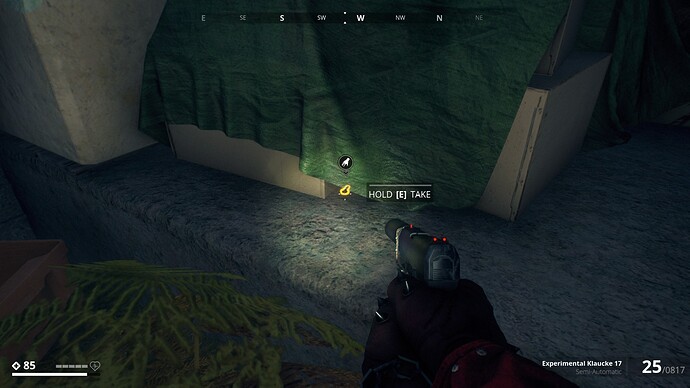 But the bigger ones, with two double-sided doors, will remain locked for forever. And that is not all, there are several houses in-game that also have locked doors and only way in, is by having Lockpicking skill with hairpin lockpicks.
Only way around it, without unlocking Lockpicking skill, is to play Multiplayer, where your buddy has Lockpicking skill, so that they can open the door for you.

Ah yes, I played almost only with my fiance but now he plays less GZ so I’d better get that. Especially with the locked houses in the map re-vamp.

I think you need to know the value of Lockpicking skill.

My main had it, so everything after was unlocked anyway. Though for new players - 100% agree 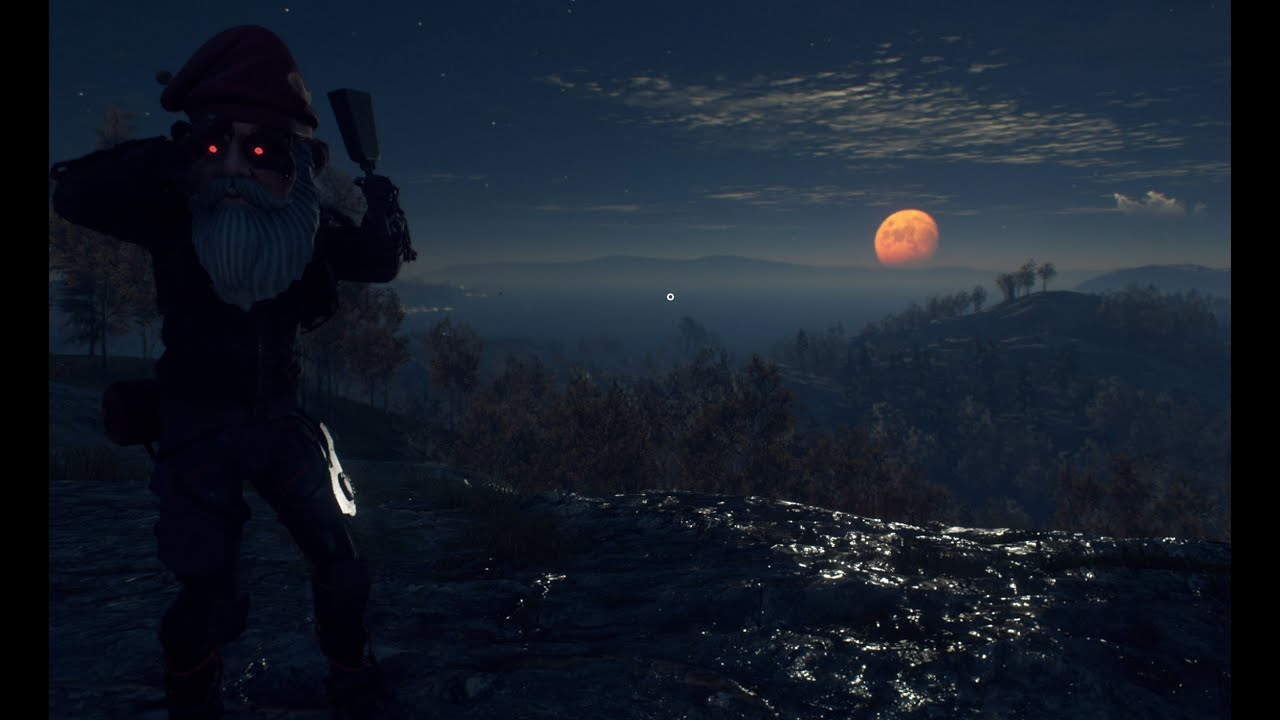 I’m very much looking forward to combining the new ammo types with the skill perks in the build. Should make for some great content down the line. Full Skill Point guide in the description.